Sick kittens were illegally abandoned at the Companions Animal Center on the night of Tuesday August 23.

At approximately 9 p.m., a dark-colored four-door van pulled into the parking lot of the shelter (formerly known as the Kootenai Humane Society) at 11650 N. Ramsey Road in Hayden and dumped a plastic container with holes drilled into a top which was not secure. Four sick kittens were inside.

“A perfect scenario for a hungry wild animal,” development director Vicky Nelson told The Press. “It’s an open field. We have all kinds of animals here. For them to pull out a plastic container, with these cracks, a hungry animal could have knocked it over and the four kittens could have disappeared.”

The kittens, suffering from upper respiratory problems, are now cared for by the shelter.

“By the time staff arrived around 7:15 a.m., someone had called Coeur d’Alene Animal Control to report kittens were left at the shelter,” Nelson said. “I don’t know how anyone would have known if they hadn’t put them there.”

The kittens were left just 20 feet from a sign telling people that abandoning animals violates Idaho Law 25-3504 – Committing Cruelty to Animals. Under this law, first offenses are punishable by up to six months in jail or fines of $100 to $5,000, or both. Fines and jail time increase with each offence.

“It’s really amazing how often this happens,” Nelson said. “All they have to do is call us and say, ‘I found a litter of kittens.’ We’ll bring them in…If they’re less than 4 months old, there’s no charge. We’ll make sure they’re well taken care of and get them repaired.”

Many abandoned and injured kittens have been taken in by the non-profit shelter this summer.

On August 20, a crate of kittens was discovered on the side of Interstate 90, rescued by two travelers returning from St. Maries who had just stopped to investigate.

“Apparently they saw the boxes moving and brought them in,” Nelson said.

Kristina Jensen, who works at the shelter’s front desk, was on call when the kittens were brought in.

“I looked in there; they were so fuzzy and cute,” she said. “We took them out to move them to another kennel and there was newspaper and birdseed with them.”

She said she was amazed by the people who went out of their way to help abandoned animals.

“There are a lot of people who don’t stop. They let them go and let them go,” Jensen said, adding that the people who brought the kittens from the side of the highway saved their lives.

“It was very hot the day they arrived,” she said. “They really needed water and stuff.”

The highway kittens have already been adopted, Nelson said.

On Saturday, a five-week-old brown tabby kitten with infections and facial injuries was brought to the shelter after being found on Government Way in North Hayden.

“The person who found him said a feral cat had kittens,” Companions Animal Center executive director Chris McDowell said Monday. “We don’t know what happened to this one. He has serious facial injuries. He has a puncture wound under his left eye, his upper teeth are missing, his mouth has injuries. A tooth fell out while we were holding him for the first time.”

Eli, as named by shelter staff, was taken to an emergency pet clinic where he was given medication and fed through a tube. It is assumed that he was attacked by a small animal.

“This little kitten, if he hadn’t had treatment, he wouldn’t have survived. The infection would have taken over his little body,” McDowell said. “We’re just grateful someone brought the little kitten in so we could give him the care he needs.”

McDowell said the kitten has a long way to go and will be cared for at Companions Animal Center at least two months before it is available for adoption.

“We have hope for him. We can tell he wants to succeed. He’s a little fighter,” she said. “We’re sure he’ll pull through and be adopted.”

If anyone has information about who abandoned the kittens at the shelter, they can contact the Kootenai County Sheriff’s Animal Control Office at 208-446-1300.

The shelter does adoptions by appointment only. Visit companionsanimalcenter.org or call 208-772-4019 for more information. 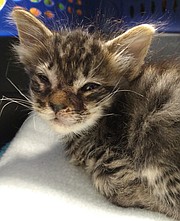